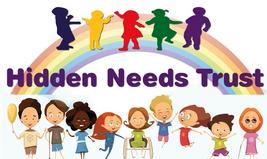 ​Supporting Children with Special Educational Needs (SEN), young people under the age of 25 with learning difficulties, their families, carers, and the specialist educational providers that support them in Dorset and Somerset.

​Hidden Needs Trust (HNT) was founded by Rachel Goodfellow in 2015, initially as a one-off tool to raise much needed funds for the Dorset and Somerset Opportunity Groups, Rachel is a trustee of the Yeovil Opportunity Group.  Whilst these specialist groups are charities, they require in excess of £40,000 per year to deliver their specialist skills to pre-school SEN children.  Following the success of the initial fund raise, despite being a mum to a busy family, Rachel found the time to carry HNT forward into second year and still continues to drive HNT forwards.

Late in 2015, HNT linked up with Somerset Community Foundation (SCF) bringing benefits that helped with fundraising, promotional opportunities as well as looking after HNT finances etc. In late summer 2019 following talks with SCF and the changing direction HNT was taking, the decision was taken to break away from SCF and for HNT to apply to become a registered charity in its own right, an application to the Charity Commission was duly submitted resulting in HNT becoming a Charitable Incorporated Organisation (CIO) in January 2020.

Since its conception HNT has expanded into a charity that incorporates fundraising with raising awareness of the support children with Special Educational Needs (SEN), their families and carers require.  Rachel, under the HNT banner now offers presentations/talks to social groups, schools, local authority venues etc. as well as attending various events, fayres, pop up shops and similar raising funds and promoting awareness of SEN.

2019 saw the first HNT Charity Concert at the Octagon Theatre in Yeovil, Somerset.  Following its success, a second concert was held in 2020, again a huge success. These concerts are now an annual event.  Whilst open to all, a great emphasis is placed in ensuring those touched by SEN can enjoy the concerts.  To achieve this aim HNT seeks sponsorship to provide sponsored seats for those affected by SEN.

All monies raised after operational costs, HNT has no paid employees, up to the end of 2019 has been shared between the Dorset, Somerset Opportunities Groups.  From 2020, whilst the Dorset and Somerset Opportunity Groups will remain the main beneficiaries HNT aims to also provide grants to others, to include clubs/groups and individuals linked with SEN, subject to application and meeting HNT’s grant criteria will be considered by HNT’s trustees on an annual basis.

Alongside HNT Rachel has diversified into local radio with a new programme..."Charity Corner"...which is on air every first Sunday of the month on Sherborne based Abbey 104 at noon. On this show she interviews key people who work for local smaller charities, finding out exactly what they do, who benefits, the difficulties they face and what the community can do to help.
Stemming from this all the charities who have been on the show are invited to a Charity Corner Lunch. These lunches are held every 4 months at one of the charity venues so that we can see at first-hand what they do and their premises.
The main aim of the lunches is to get people working together, charities joining force with fundraising events and helping one another out and not letting smaller charities struggle on alone. To date, it has been a tremendous success!

Sadly 2020 brought us COVID-19 which curtailed HNT's normal activities.  However not all was lost as Rachel diversified into giving support in other ways.